Montmorency is a young lady with blond, curly long hair and blue eyes. There is a large, red ribbon tied around her hair. Like other students, she has the same format of clothing, though she has some alterations. Instead of white socks, she wears stocking-like socks reminiscent to those of Louise and wears black school shoes.

Montmorency, like most Tristain aristocrats, has a great deal of pride. Like many people, she seemed to value her own name, like when Saito Hiraga called her "Montmo" as seen in the anime.

Montmorency attends class under Professor Chevreuse and is among the students who witness yet another explosion by Louise de la Vallière. Afterward, she is seen in the company of Kirche von Anhalt Zerbst and Tabitha, where the former two constantly irritate and laugh at Louise's failure.

During the exam, Montmorency expresses that she would become embarrassed if she ends up summoning a strangely familiar, to which Guiche de Gramont assures her that she would summon a cute and charmingly familiar. Later, she summons an orange frog. When Louise chants her summoning, she remarks it to be strange; after an explosion caused by Louise, Montmorency becomes shocked to see a human summoned by Louise.[2]

At Alvíss Dining Hall, Montmorency and Kirche have breakfast, where the latter remarks upon the arrival of Louise and Saito, the plebeian that was famously summoned by Louise. Later, together with Guiche, Montmorency asks him to keep his familiar buried whenever they are together. Saito serves Guiche some cake; with Guiche flattering Montmorency, she asks him if the rumor that he had been seeing a freshman is true, but he immediately dismisses this. Saito utters words that ring the same from what Guiche told Katie the previous night, making her confused and suspicious. Eventually, Saito exposes Guiche's two-timing. Upon learning of this, Montmorency becomes furious; together with Katie, she calls him a liar and slaps him, leaving him humiliated in front of many students.[3]

Seemingly reunited with her boyfriend after the two-timing incident, Montmorency receives a Mythril brooch from Guiche, when Saito interferes and asks Guiche where Count Mott resides.[4]

Montmorency is experimenting on various looks on Robin but has a hard time getting the right appearance for her frog familiar. Later, Princess Henrietta arrives at the Academy, welcomed by the students and staff. As the Familiar Exhibition commences, Montmorency and Robin perform together and display Robin's prowess and talent. After Fouquet attacks, the students become wary of the incident as Osmond checks the Vault and sees a message from Fouquet, confirming her robbery.[5]

During the Academy holiday, Montmorency and Guiche have a misunderstanding, where the former tells him that she has fallen out of love of him, mainly due to his playboy activities. Because of this, Montmorency concocts a love potion. At night, Montmorency invites Guiche to dinner; she attempts to make him fall in love with her due to his frequent playboy activities by mixing her earlier-made love potion with his drink. Montmorency proposes a toast with Guiche; as he is about to drink, an angry Louise arrives and grabs his drink, much to Montmorency's dismay. She later comes to Louise's and Saito's room, anxiously confirming that the potion had indeed taken effect.[6]

Montmorency explains that Louise has mistakenly drunk a love potion supposedly for Guiche. Upon hearing this, Guiche becomes flattered that she would go that far for him. Saito demands Montmorency to bring Louise back to normal, but she shrugs this off, as the potion's effect would wear off from about a month.

Eventually, with the situation getting out of hand, Saito goes to Montmorency and blackmails her into reverting Louise back to normal if she does not want to get apprehended by authorities for making illegal potions; Montmorency reluctantly agrees. 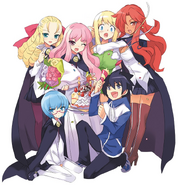 Retrieved from "https://thefamiliarofzero.fandom.com/wiki/Montmorency_de_Montmorency?oldid=9210"
Community content is available under CC-BY-SA unless otherwise noted.