Every school year, the students of Tristain Academy of Magic summon their familiars. This is considered a special ritual where a mage summons their eternal protector and partner, which usually is some sort of magical creature. Louise manages to summon a human commoner named Saito Hiraga, leaving her totally humiliated. Due to the sacredness of the ritual, Louise is left with no other choice but to reluctantly accept Saito as her familiar. She proceeds to treat Saito as any other familiar (only worse), such as making him sleep on a bed of hay and beats him with a whip for little to no reason, among other things. There are other familiars summoned by their masters, such as Kirche, who summoned a fire salamander which she calls Flame, Guiche who summoned a mole, who was named as Verdante, and a frog named Robin, whose master is Montmorency. There is also a wind dragon who can turn into a human, Sylphid or in her human form, named Irukukwu, summoned by her master, Tabitha. There are other, unnamed familiars with their masters in the academy.

Saito "stucked" with other familiars. 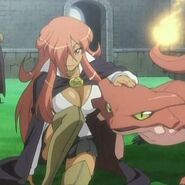 Kirche with her familiar, Flame.

A familiar spirit known as a Bugbear with its master.

Other unnamed familiar spirits with their masters.

Other unnamed familiar spirits with their masters.
Add a photo to this gallery
Retrieved from "https://thefamiliarofzero.fandom.com/wiki/Familiar_Spirit?oldid=9044"
Community content is available under CC-BY-SA unless otherwise noted.